Beautify Your Garden
with Flowering Trees for Spring

Though fleeting and ephemeral, flowering trees are eagerly
anticipated and much enjoyed every spring.  There are a few trees that bloom in the summer and fall, but spring is the high season for the prima donnas of the tree world to put on their show.  As much as I enjoy seeing them in botanical gardens and while driving around town,  I want them in my own garden, too!   Magnolias and cherries, dogwoods and redbuds, pears and crabapples--there are so many gorgeous ones to choose from, it's tempting to want a few of each!   It's hard to choose a favorite, but mine may just be the Yoshino cherry.  I love the soft white to pale pink cloud of bloom before the leaves emerge, as delicate as bubbles, and then the carpet of pink snow as the petals fall.  As a bonus, the leaves turn a good color in the fall.  What's your favorite? 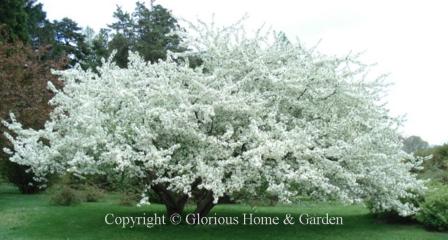 Everyone needs at least one beautiful spring-flowering tree!  Even in the smallest yard, one gorgeous tree can make the landscape.  One of the first things anyone should do when purchasing a new home, especially if the garden is a blank slate, is to plant a few spring flowering trees.  Evergreens, too, for winter color and as the "bones" of the garden.  Shade trees as well, of course, given how long they take to mature, but a couple of your favorite blooming trees will give you color and delight and create the basis for your garden.  If you are fortunate enough to have a property with mature shade trees, then all you may have to do is add a few of your favorite flowering trees and evergreens to enhance your property.

Here is a list of some favorite spring flowering trees to choose from.

Aesculus hippocastanum, European horsechestnut, Zones 4-7.   This flowering tree has large dense trusses of white flowers with pink centers and is very eye-catching when in bloom in late April to mid-May.  But be aware that this is a big tree that can reach 75' or more, so is best suited to large gardens. 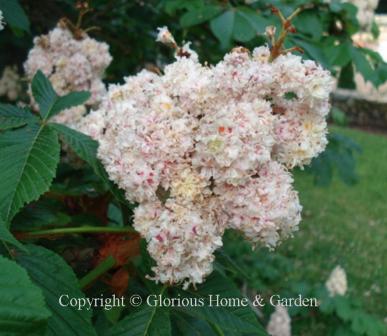 Aesculus X carnea, red horsechestnut, Zones 5-9.   The red
horsechestnut has large flower clusters that are looser and more
open than the European horsechestnut, and growing to about 35' makes it a better candidate for smaller gardens.   'Ft. McNair' has upward facing pink flowers with yellow throats at the tips of branches that give the tree a sort of candelabra effect. 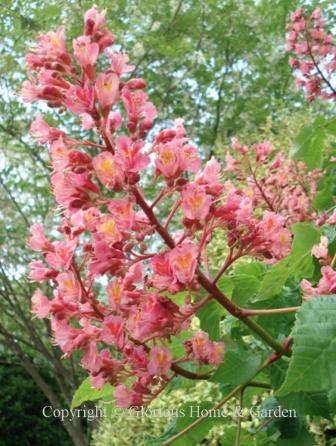 Amelanchier laevis, Allegheny serviceberry or Juneberry, Zones 4-8.  An understory tree (to 15-25’) serviceberry is native to Eastern North America.  White flowers in April lead to edible purple berries that ripen in June that can be used for jams or pies, and it is a good food source for birds.. A lovely small tree that is  nice for the edge of woodlands, natural areas, or as part of your private backyard wildlife habitat. 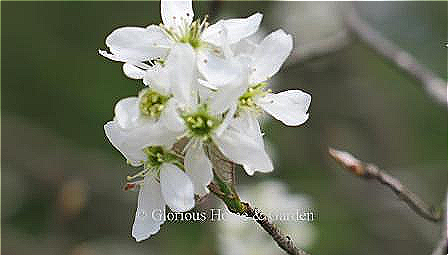 Catalpa bignonioides, southern catalpa, Zones 5-9.   This southern native is very striking in bloom with its large panicles of ruffled white tubular flowers  that are streaked with purple and spotted with yellow. 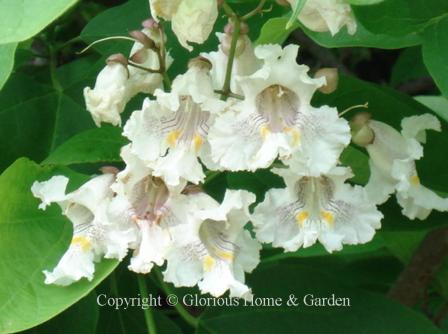 Cercis canadensis, Eastern redbud, Zones 4-9.  Taking the stage just before flowering dogwoods and then in concert with them for a time, redbuds and dogwoods blooming together make beautiful music in the spring woodland--and in our gardens!  The combination of redbuds in bloom with the emerging green leaves of other trees is just stunning.  Though called redbuds, the buds and flowers are more purpleish-pink than red, and resemble little sweet pea blooms, and indeed the genera Cercis is in the pea family.  The flowers have the curious habit of popping out along the length of a branch, and even directly from the trunk, before the heart-shaped leaves appear and are followed by long pea-pod like seedpods.

Hybridizers have exploited our native redbud tree in recent years and have created an explosion of wonderful new cultivars, selecting for flower color, form and foliage color.  One of my favorites is 'Forest Pansy' which has beautiful deep purple heart-shaped leaves (though they tend to fade to purple-green by the end of summer), and begins to bloom very young (a young 'Forest Pansy' is pictured below). 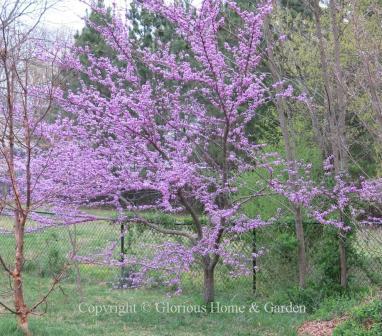 New golden-foliaged cultivars can really light up a dim space such as the edge of a woodland and include 'Hearts of Gold' with its beautiful golden-green foliage after the lavender-pink flowers are gone; and ‘The Rising Sun’ with gorgeous golden to orange foliage that ages to light green.

Variegated foliage varieties include ‘Floating Clouds’ with green and white splotched leaves; and ‘Carolina Sweetheart,’ a real knockout with variegated leaves of maroon, pink, and green with a white margin.

A very exciting one is ‘Flame Thrower®’ which has the typical pink flowers in spring, but it’s the foliage that steals the show.  The new leaves emerge burgundy-red then change to orange, yellow to green hues as they mature, which are often on the same branch at the same time! 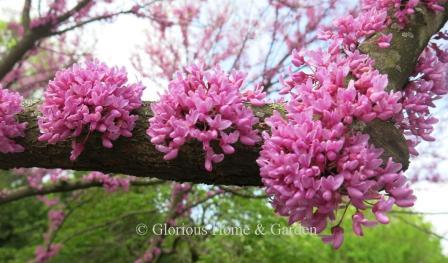 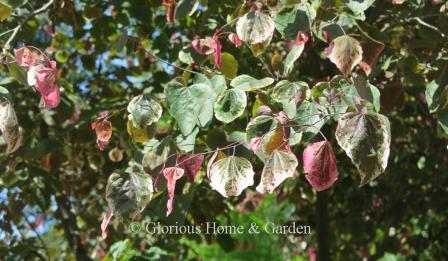 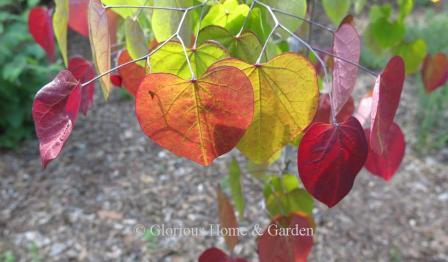 'Ace of Hearts' with lavender-pink flowers has a compact form to about 12’ making it a good choice for smaller spaces.

Weeping forms include ‘Covey,' ‘Ruby Falls,’ and 'Traveller.' There are white cultivars too, including 'Alba,' and 'Royal White.' 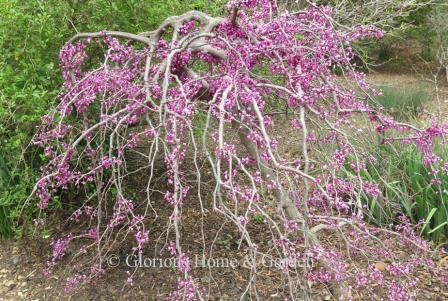 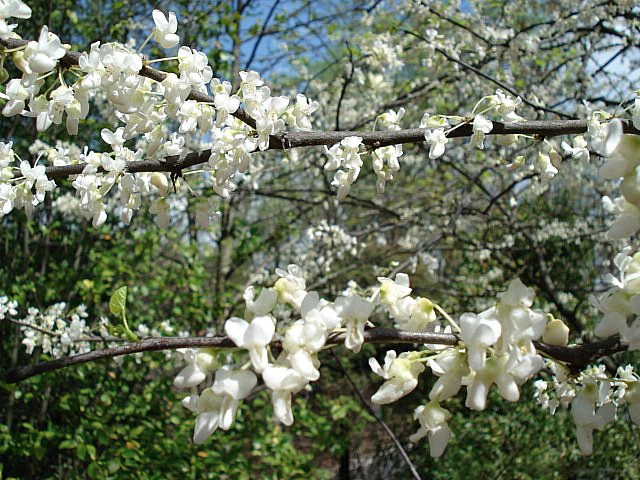 And then there is ‘Vanilla Twist®’ which is both weeping and white! 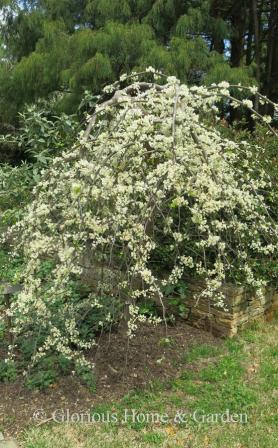 Chionanthus retusus, Chinese fringetree, Zones 6-8.  Clouds of pure white blooms smother this flowering tree, looking like a late spring snow has settled on the branches.  The wide dome shape, coupled with handsome bark and olive-like fruits make this tree a choice  selection for an ornamental specimen. 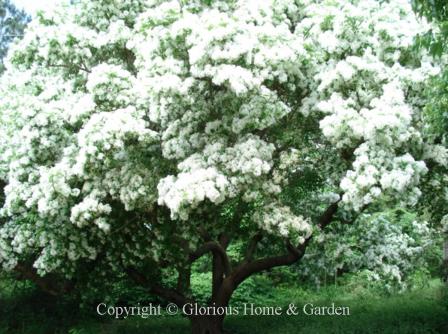 Chionanthus virginicus, white fringetree, Zones 4-9.  Our American native fringetree is also very handsome in bloom.  It has a lighter, airier look due to the long, narrow white petals.  Easy to grow and adaptable, this small tree or large shrub deserves wider planting in our gardens. 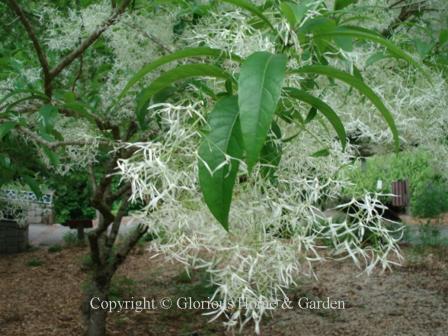 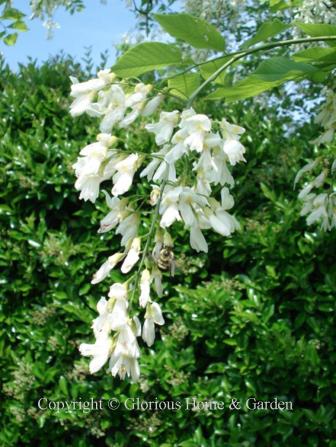 Cornus florida, flowering dogwood, Zones 6-9.   The favorite flowering tree of many, and for good reason.   The lacy effect of the snowy white blooms on tiered branches is spectacular!  The showy part of the bloom are actually four large white bracts while the true flowers are tiny and clustered in the center.  Excellent cultivars chosen for their  profusion of bloom and large bracts include 'Appalachian Spring,' 'Cherokee Princess,' Cloud 9,' 'Fragrant Cloud,' and Springtime.'  Pink and red flowered ones include 'Apple Blossom,' 'Cherokee Chief,' C. florida var. rubra (shown below), 'October Glory,' and 'Royal Red.'  Flowering dogwoods with variegated foliage include 'Cherokee Daybreak,' 'First Lady,' Hohman's Gold,' 'Tricolor,' and 'Welchii.'  Or try 'Plena' or 'Bob Timberlake' if you would like an unusual dogwood with double white blooms.  For a particular situation, there is even a weeping form known as 'Pendula.'

Flowering dogwoods are unfortunately susceptible to several pests and diseases among them dogwood borer and anthracnose.  For this reason, it is not a good idea to dig up young seedlings in the woods.  Planting them in your garden may expose your existing dogwoods (and your neighbor's) to these blights.  Named cultivars have been chosen for their disease resistance, and they flower more abundantly to boot.  Rutgers University has developed new hybrids that are a cross between C. florida and C. kousa that have greater disease resistance and share some of the best features of both species, though they do not produce fruit.  'Aurora,' 'Celestial,' 'Constellation' and 'Venus' (3rd picture below) are white; and 'Stellar Pink,' is, well, pink. 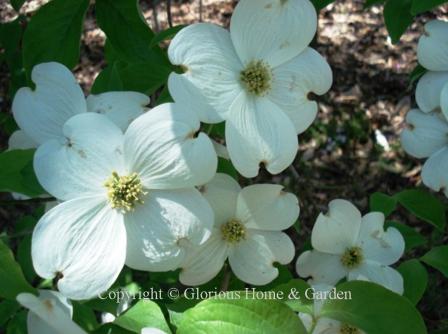 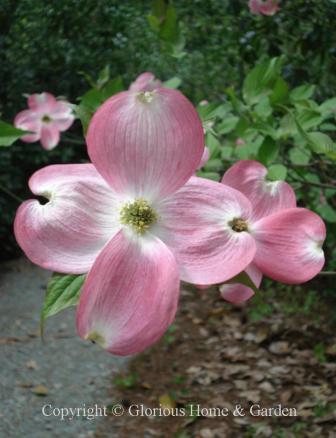 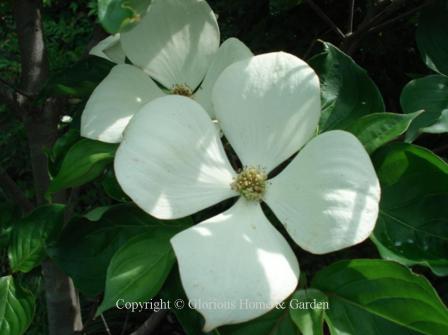 Cornus kousa, Kousa or Chinese dogwood, Zones 5-8.  Kousas are great to extend the dogwood blooming season as they open in May or June after C. florida is finished, and after the leaves have appeared.  But the effect can be just as spectacular!  The showy bracts are smaller than on C. florida and are pointed.  Added benefits are the round, red raspberry-like fruits that ripen in fall and the exfoliating bark.  C. kousa is also less susceptible to the diseases that plague C. florida.  A couple of good cultivars are 'Milky Way,' known for its prolific flower and fruit production; and 'Wolf Eyes,' a variegated form.  'Miss Satomi is a pink-flowered kousa of about 12-15.' 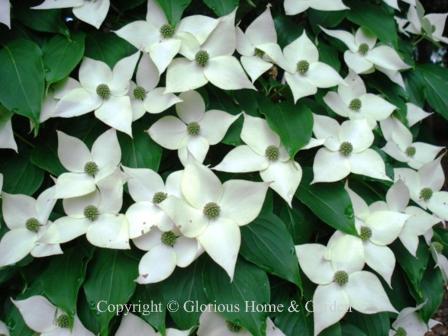 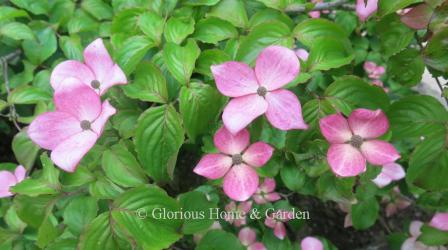 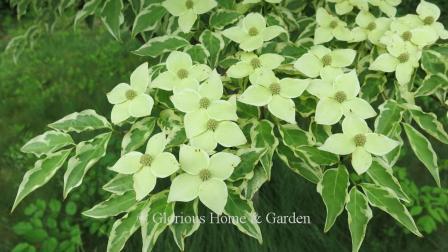 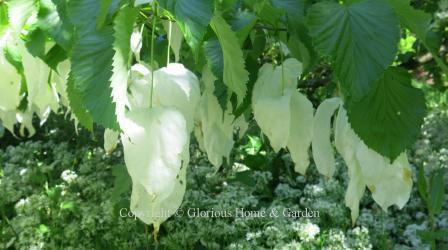 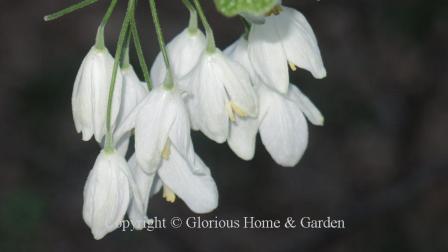 Laburnum X watereri, Waterer laburnum or goldenchain tree, Zones 5-7.  Grown for its large, pendulous trusses of yellow pea-like flowers, Waterer laburnum is a spectacular sight in full bloom.  It has been used to great effect in Europe over trellises and arches.  Best for the cooler climes of the northeast.  Beware of using this where children are about as the seeds are poisonous.  'Vossii' has a superior habit and longer flower racemes. 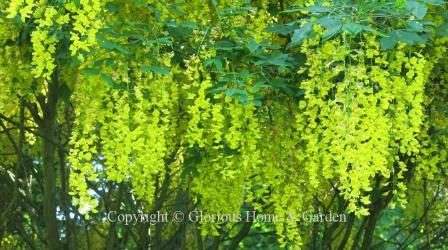 Liriodendron tulipifera, tuliptree, Zones 4-9.  The flowers of the tuliptree do indeed resemble a tulip (as does the outline of the leaves), but they are usually carried in the upper branches of these tall trees they often go unnoticed unless knocked to the ground in a windstorm. 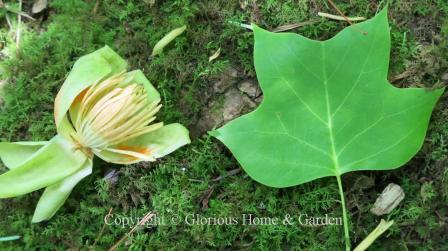 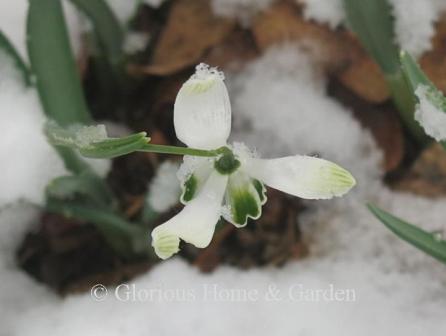