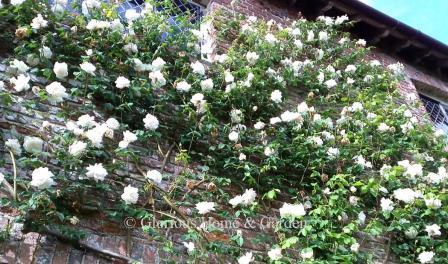 Old garden roses are the earliest hybrids developed from wild species.  They are further subdivided into groups, but all were developed before 1867 when the first hybrid tea, ‘La France,’ was introduced.  Many of them bloom only once in spring, but very heavily, but some such as the Autumn Damask, Bourbons, and Hybrid Perpetuals, among others, were bred to bloom for longer periods of time and even into fall.  Antique roses are enjoying a resurgence of popularity today due to their beautiful shapes, hardiness, disease resistance, and most of all intoxicating fragrance.  And gardeners have discovered that they require much less maintenance and fussing with than the Hybrid Teas, for instance.  Also, while Hybrid Teas, though possessing undoubtedly gorgeous flowers in form and color, require more care, and tend to be stiff and better suited for formal planting.  The antique roses add charm and grace in garden beds and borders in combination with perennials, annuals, and other shrubs due to their graceful habits.

Gallicas are one of the oldest groups of antique roses.  They are characterized by having few thorns, a compact habit with flowers borne on erect, firm stems, and a suckering proclivity which can develop into large colonies.  However, gallicas only bloom in spring, though for a quite long period, but their flower form, abundance of blooms and rich colors make up for that.  Colors run from all shades of pink to mauve, purple and red.  Gallica roses include ‘Belle de Crécy,’ violet; ‘Cardinal de Richelieu,’ purple; ‘Charles de Mills,’ rich red to mauve; ‘Complicata’ single pink; Rosa gallica ‘Versicolor’ (also called Rosa Mundi), deep pink streaked with pale pink; Rosa gallica var. officinalis (Apothecary’s Rose, or the Red Rose of Lancaster), deep pink; ‘Tuscany Superb,’ purple. 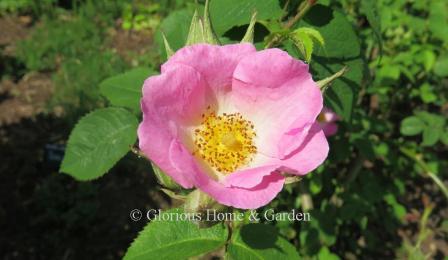 The damask rose, Rosa x damascena is a very old hybrid, derived mainly from R. gallica and R. moschata.  It has been grown from ancient times and used to make attar of roses, the essential oil used in perfumery, due to its exceptional fragrance.  As a group, the damasks bloom only in early summer (except the Autumn Damask which extends its bloom into autumn), are highly fragrant, very thorny, and disease resistant.  Other Damask hybrids include ‘Celsiana,’ blush pink; ‘Hebe’s Lip,’ white w/pink edges; ‘Ispahan,’ clear pink; ‘La Ville de Bruxelles,’ pink; ‘Leda’ or Painted Damask, white with crimson markings on the petal tips; ‘Mme. Hardy,’ white; Rosa des Quatre Saisons, (Rosa x damascena var. semperflorens), called the Four Seasons Rose or Autumn Damask for its long bloom period into autumn, pink; Rosa x damascena ‘Versicolor,’ also called the York and Lancaster rose, blooms can be white, pink, or a combination.  Zones 4-10:

Centifolia Roses:  The centifolia, cabbage, or Provence rose so named for its tightly packed very fragrant blooms of up to 100 petals, is one of the most romantic of the rose classes.  The original centifolia, Rosa x centifolia, is a hybrid created by the Dutch by crossing Damask roses with others in the 16th c.  Centifolias tend to be quite thorny and have a lax, drooping habit due to the heavy flowers which adds to their charm.  Some of the centifolias also exhibit the curious fragrant “mossy” calyxes on the buds which are beautiful—see “Moss Roses” further down.  Centifolia roses include ‘Bullata,’ pink with unusually large leaves resembling lettuce; ‘Fantin Latour,’ pale pink w/darker center; ‘The Bishop,’ purple; ‘Tour de Malakoff,’ violet-red; and ‘Variegata,’ white striped w/pale pink. 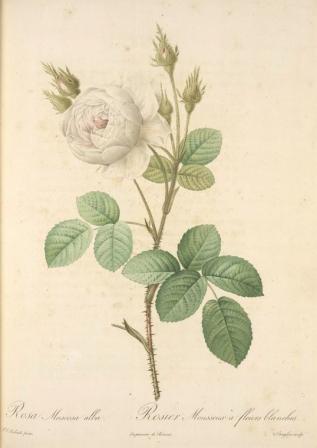 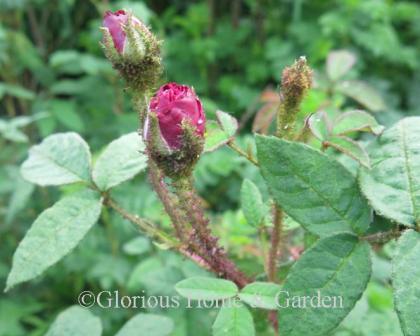 China Roses:  Long ago, the Chinese started cross-breeding their native species of rose, Rosa chinensis f. spontanea, and naturally occurring hybrids, and the result was what are known today as China roses.  These new roses bloomed continuously, and were disease-resistant and long-lived.  All the repeat-flowering roses we enjoy today owe this characteristic to the early Chinas.  And unlike most other roses which fade with age, the Chinas darken with age, most notably ‘Mutabilis.’  China roses include ‘Archduke Charles,’ pink with white; ‘Bengal Beauty,’ red; 'Cramoisi Supérieur,' red; ‘Louis Philippe,’ deep pink; and these pictured below.

Rosa ‘Ducher,’ Zones 7-10, is the only white China rose, though sometimes described as ivory, and may have a slight pink tinge on the outer petals, from 1869.  Grows about 3-5’.  An Earth-Kind® rose selection. 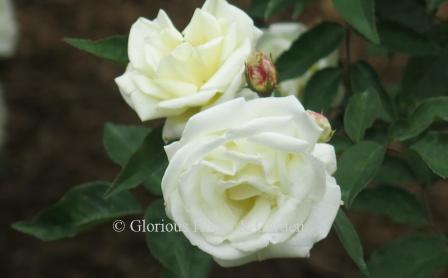 ‘Green Rose’ (R. chinensis var.viridiflora), Zones 6-10.  A green rose?  Yes!  This is the famous "Green Rose of China," a curious oddity where what are normally petals were transformed into sepals.  As it has no flower, it makes no seed, and can only be propagated by cuttings.  Useful as an accent in flower arrangements, for drying, and in cottage gardens. 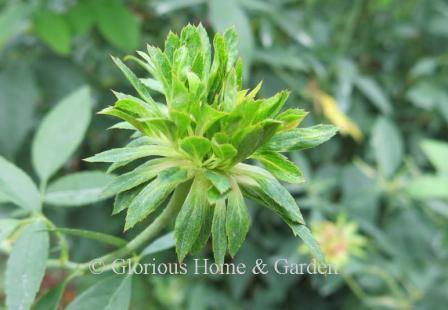 Rosa 'Mutabilis,' butterfly rose, Zones 7-8.  This rose is fascinating in that the five-petaled single flowers change color as they mature. Opening yellow, each flower goes through several “mutations” from soft yellow, to peach, to pink and dark rose. 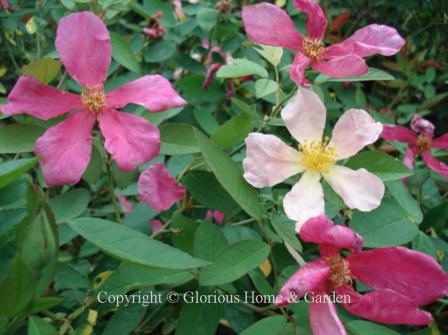 ‘Old Blush,’ Zones 6-10, is a very old rose and is still extremely popular today for its long flowering period, disease resistance, fragrance, and near thornless-ness. 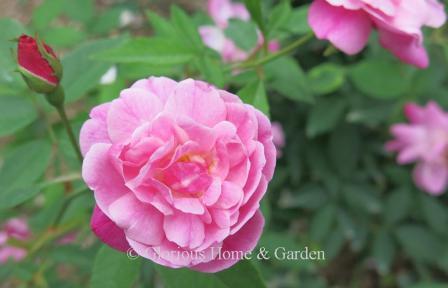 ‘Spice,’ Zones 7-10, a light pink double that grows from 3-6’, has a spicy fragrance, and produces repeated flushes of blooms into fall.  A found rose, it may be ‘Hume’s Blush Tea-Scented China’ from 1809, an ancestor of the class of Tea roses and others.  It has been chosen as an Earth-Kind® rose by the Texas AgriLife Extension Service. 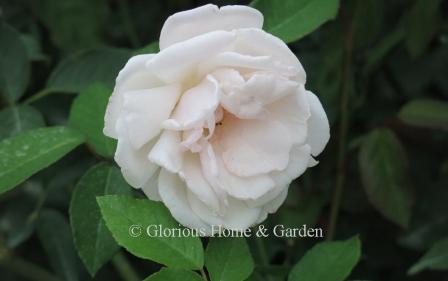 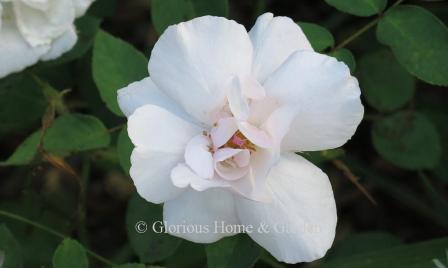 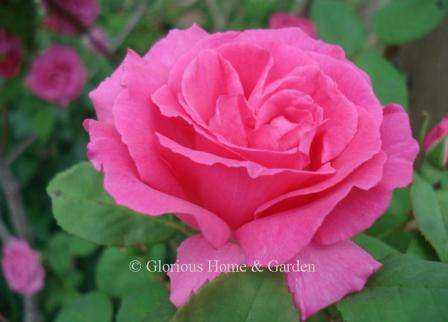 This class of roses was developed in the early to mid-19th c. from Bourbon and China roses to strengthen the repeat flowering characteristic and hardiness.  Hybrid Perpetuals were very popular until the Hybrid Teas came along and overshadowed them.  But with the recent rediscovery and excitement over the older types of roses, these are enjoying a renewed popularity.  Today.  Varieties include ‘American Beauty,’ deep pink; ‘Baronne Prévost,’ rose pink; ‘Ferdinand Pichard,’pink w/crimson stripes; ‘Frau Karl Druschki,’ pure white; ‘Marchesa Bocella,’ pink; ‘Paul Neyron,’ rose pink; ‘Reine des Violettes,’ violet. 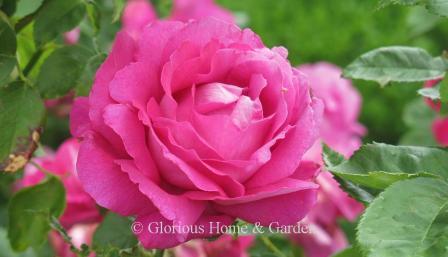 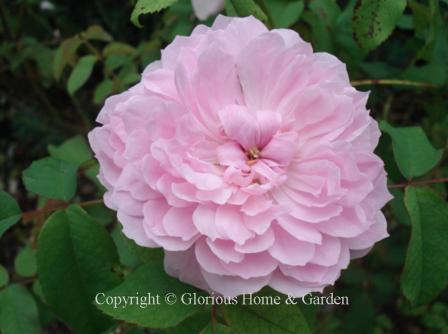 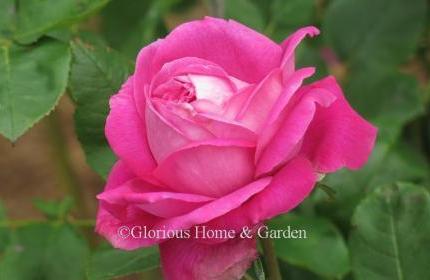 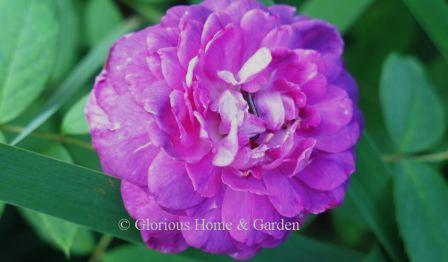 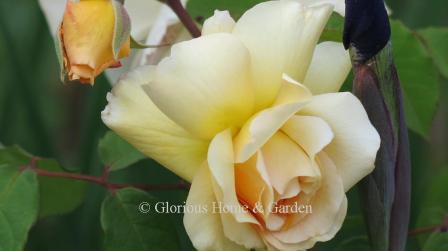 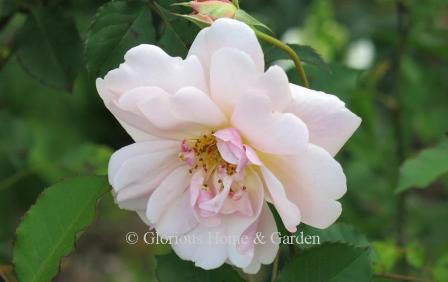 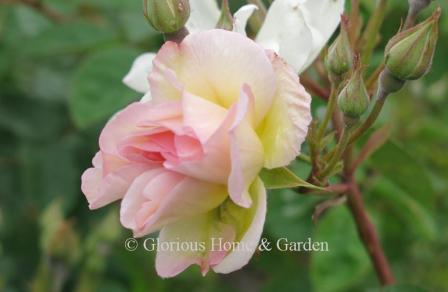 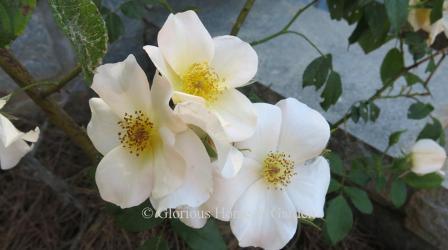 Rosa rugosa is noted for its vigor, disease resistance, adaptability to seaside conditions, and fragrance, but also for its thorniness and tendency to sucker and form colonies.  Hybridizers have attempted to create new forms using R. rugosa and other species and hybrids to retain the best qualities and minimize the less desirable ones, but it seems that prickliness and suckering are dominant traits.  However, those qualities also make them superb for barriers, erosion control, hedges, and cottage garden subjects.  They are long-blooming, have lovely fragrance, and most have exceptionally large hips that are superb for making jams and jellies.  Rugosa hybrids and derivatives include ‘Agnes,’ yellow; ‘Blanc Double de Coubert,’ white; ‘Conrad Ferdinand Meyer,’ light pink; ‘Parfum de l’Hay,’ red; ‘Sarah Van Fleet,’ pink; ‘Sir Thomas Lipton,’ white; ‘Topaz Jewel,’ yellow. 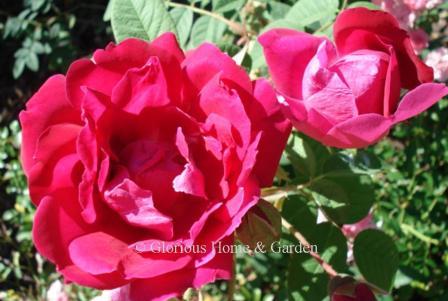 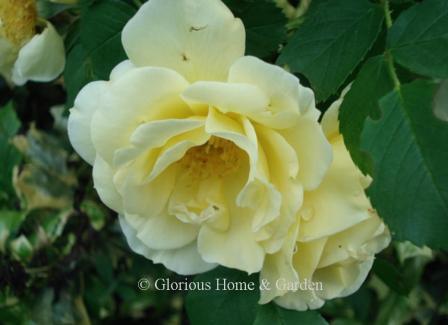 Noisettes have the interesting distinction of being the first class of roses to arise in the United States when John Champneys, a planter from Charleston crossed the popular China rose ‘Old Blush’ with a musk rose.  He called the result ‘Champney’s Pink Cluster.’  A Frenchman living in Charleston, Philippe Noisette, raised another plant from Champney’s rose and called it ‘Blush Noisette.’  It caused a sensation, and soon other varieties were produced often crossed with Tea roses. Noisettes can be shrubs or climbers with clusters of blooms and are noted for delicious fragrance from their musk parentage.  They are some of the most romantic roses to choose to grow on an arbor, fence or wall.  They do not tend to be as cold hardy as some other classes of roses, but they are very well suited for the southern parts of the U.S.  Noisettes include ‘Blush Noisette,’ pale pink; ‘Celine Forestier,’ creamy white; ‘Champney’s Pink Cluster,’ pale pink; ‘Crepuscule,’ apricot; ‘Jaune Desprez,’ soft yellow with apricot; ‘Lamarque,’ white; ‘Madame Alfred Carrière,’ white; ‘Reve d’Or,’ yellow. 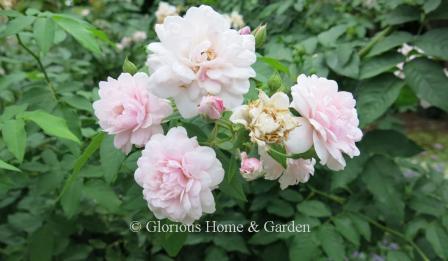 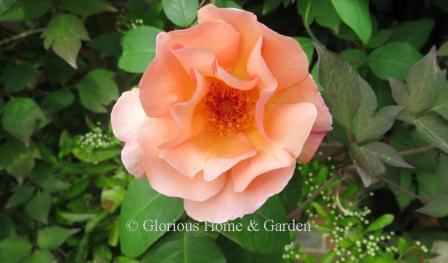 ‘Madame Alfred Carrière,’ Zones 6-10, nearly thornless white climber of 15-20,’ 1879.  The very first rose that Vita Sackville-West planted at Sissinghurst, where it still resides today on the brick façade of the South Cottage. 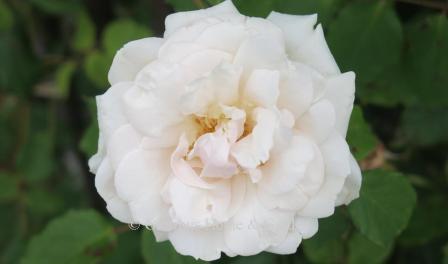 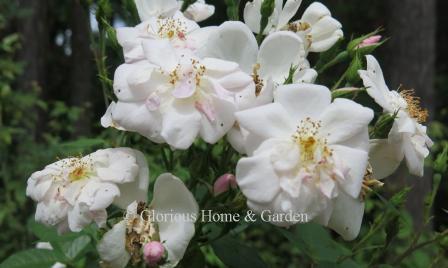 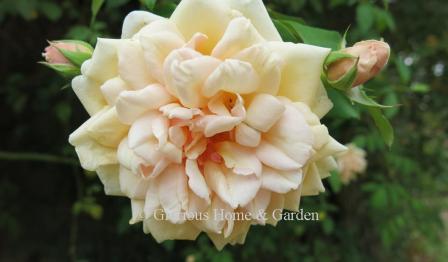 Tea Roses:  Tea roses were developed in the early 19th c. from crosses between Rosa gigantea, which contributed scent and large flowers, and Rosa chinensis, which provided repeat blooming capability.  Both species come from China.  The main issue with Tea roses is that they are not reliably cold-hardy; however, they are very well suited to the Southern states.  The Hybrid Teas beginning from 1867, which were cold-hardy, became immensely popular and resulted in the decline in popularity of the Teas.  Still, many Teas are appreciated today for their scent, large blooms, good disease resistance, and attractiveness as garden plants.  Some Tea rose varieties include ‘Adam,’ salmon-pink; ‘Duchesse de Brabant,’ pink; ‘Francis Dubreuil,’ red; ‘Lady Hillingdon,’ yellow; ‘Maman Cochet,’ pale pink w/yellow; ‘Mrs. B. R. Cant,’ deep rose; ‘Mrs. Dudley Cross,’ pale yellow flushed pink; ‘Rubens,’ white with pink shading; ‘Sombreuil Climbing,’ white. 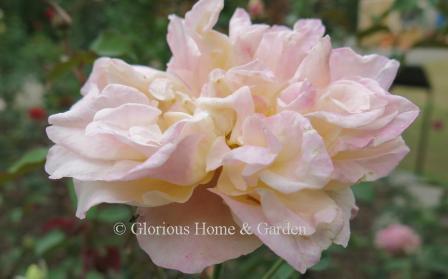 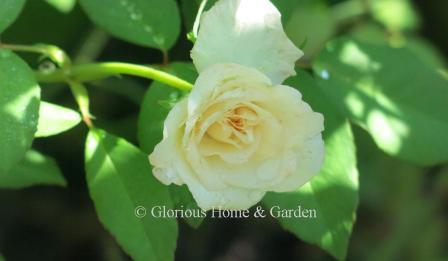 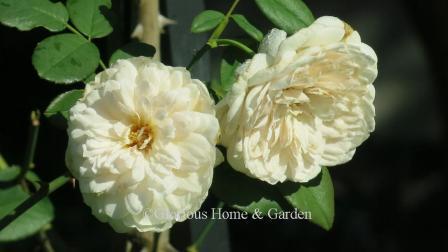 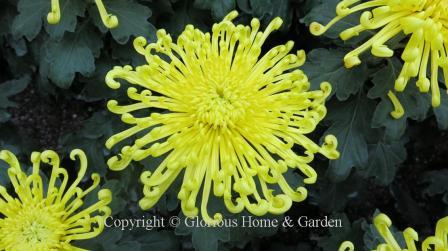