Hymenocallis maximiliani, Maximilian's spider lily, Zones 7-11.  Natives of Mexico, these summer bulbs have a delicate look and lovely fragrance.  The center resembles a petunia or moonflower with long narrow sepals expending from it.  Best in full sun with moist, rich soil. 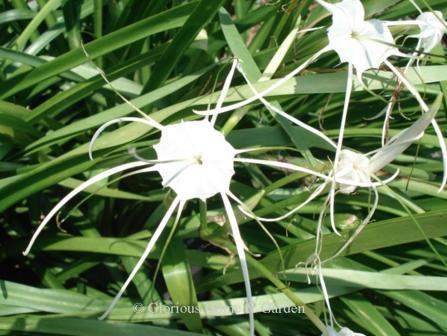 Hymenocallis narcissiflora, Peruvian daffodil, Zones 8-11.  This species has a larger cup resembling a daffodil, but with the long sepals characteristic of the genus.  Peruvian daffodils are a less cold hardy and should be dug and stored for the winter. 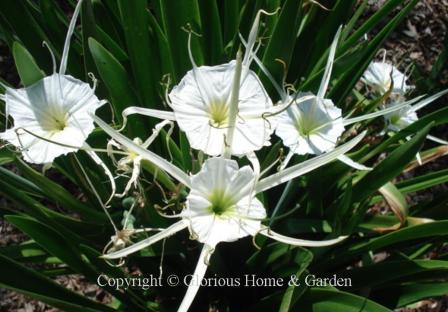 Iris domestica, blackberry lily or leopard lily, Zones 5-10.  Formerly known as Belamcanda chinensis, the blackberry lily is actually an iris.  But by whatever name it is called, it is a charming addition to the summer garden with its freckled orange flowers and narrow grassy foliage.  Spreading by rhizomatous roots, you can soon have a nice-sized clump from a small division.  Blackberry lily gets its name from the clusters of black seedpods resembling blackberries that form after the flowers and which make a nice border curiosity in the late summer and autumn border. 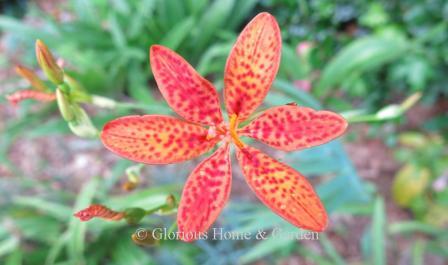 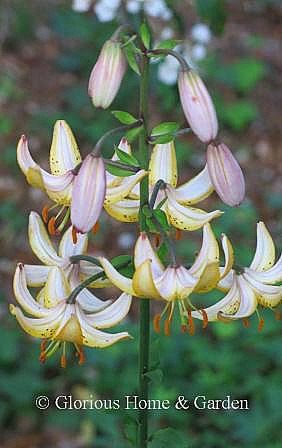 Lilies are must-haves for the summer border or containers.  Does any other summer bulb have such outstandingly exotic, romantic and diverse colors and shapes?  And many of them have some of the most beautiful and intoxicating fragrances in the plant world.  They can range from 2’ to over 6’ in height.  And they come in glorious colors from white to cream, yellow, apricot, orange, pink, rose, red, purple and near black. They grow from true bulbs which can be separated into scales to propagate them.  Many of them also produce bulbils in the axils of the leaves which can be removed and planted in pots or in the garden to bloom in about 2-3 years.  And some of them are stoloniferous and spread to form colonies.  In short, a summer garden is scarcely complete without lilies, and there are so many types, there is certain to be one to earn a spot of honor in your garden.  Please visit our lilies page to learn more. 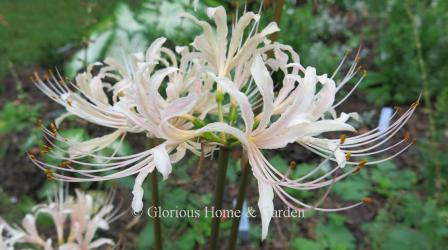 Lycoris aurea, yellow spider lily, Zones 7-10.  The yellow spider or surprise lily has golden-yellow flowers that arise on naked stalks in late summer followed by the foliage which persists until spring.  Be sure to mark where you have planted any surprise lilies to avoid inadvertently digging them up.  Great plant for the late summer garden to give it a needed boost.

Lycoris sanguinea, orange spider lily, Zones 6-10.  This species of surprise lily has red-orange flowers that blooms in mid-summer seemingly arising from the dead on naked stems after the foliage has disappeared. 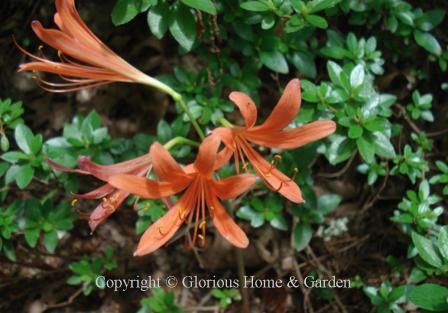 Lycoris squamigera, pink spider lilies, resurrection lilies, or "naked ladies," Zones 5-9.  “Naked ladies” are must-haves for the late summer garden.  One can plant them and totally forget they are there, and then one day, voilà, the shoot up on naked stems topped with lovely, fragrant, shell-pink flowers.  The season is short, but so welcome in August and September when the garden needs a boost.  The long strappy leaves emerge in the spring and disappear by summer leading to the happy surprise when the stout flower stems emerge. 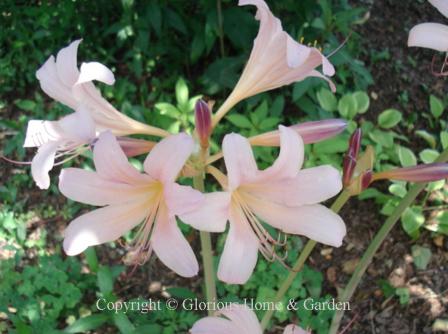 X Pardancanda norrisii, candy lily, Zones 5-9.  A cross between blackberry lily (Iris domestica, also called Belamcanda chinensis), and vesper iris (Pardanthopsis dichotoma also called Iris dichotoma).  The cross increased the color range from the orange of the blackberry lily and the purple of the vesper iris to add creams, yellows, shades of orange, pinks, reds and purples to the selection. 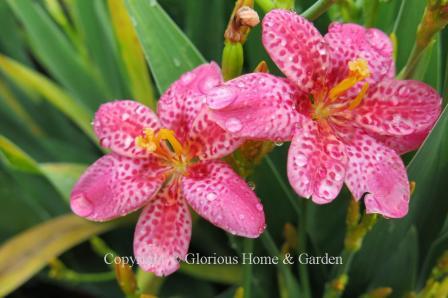 Polianthes tuberosa, tuberose, Zones 7-10.  If you love fragrance, you must plant a few bulbs of tuberose for the summer border to pick for bouquets or just enjoy in the garden.

Sinningia tubiflora, fragrant white gloxinia or hardy gloxinia, Zones 7-10.  No summer bulb is more graceful, I think, than sinningia with its long fragrant tubular flowers.   The plants grow from tubers which increase nicely making larger and larger clumps.  Sinningia s are great in containers as well as in the garden bed.  All they ask is sun and good drainage. They actually prefer to be pot bound and to overwinter in a cool, dry location. 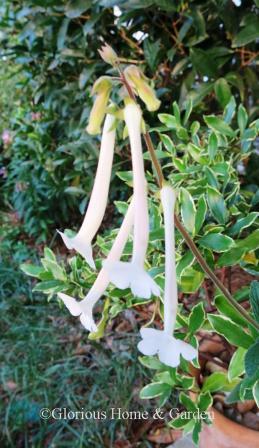 Tulbaghia violacea, society garlic, Zones 7-10.  Society garlic is a long-blooming plant lasting well into fall—even into November in my Zone 7b garden.  Grassy, chive-like foliage throws spikes of six-petaled violet-colored flowers.  The foliage has a garlicky odor when crushed.  Neat, charming, and emminently suitable for polite society—just give it plenty of sun and well-drained soil.  One can even grow this rhizomatous plant indoors in a sunny location.  There is a lovely cultivar called ‘Tricolor’ with variegated foliage, also a white cultivar ‘Savannah Lightning.’ 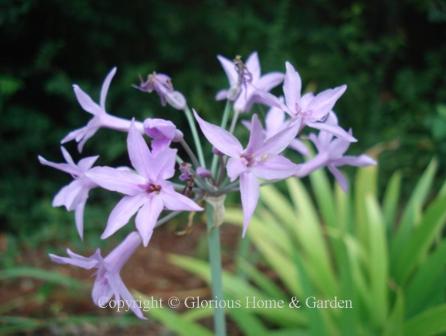 Zantedeschia aethiopica, white calla lily, Zones 8-10.  ‘The calla lilies are in bloom again.  Such a strange flower.”  Probably the most famous quote about calla lilies, it was a line from Katharine Hepburn’s character in a 1937 play called “Stage Door.” 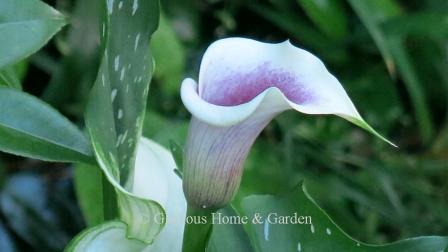 Zephyranthes candida, white rain lily, Zones 7-10.  Rain lilies are delightful summer bulbs because they bloom after a good rain, and will repeat the process for several weeks.  The thin, grassy foliage doesn’t call attention to itself, but all of a sudden up will pop a cluster of slender white buds that open to the sun and persist for several days. To propagate, you can dig the bulbs when they have gone dormant and replant the little bulblets that form around the mother bulb.  North of Zone 7, the bulbs should be dug in the fall and stored in vermiculite or dry peat moss in a cool area that does not freeze to be replanted in the spring.  They can also be grown as house plants. 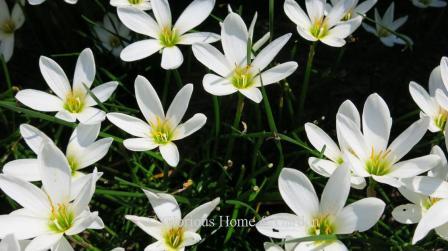 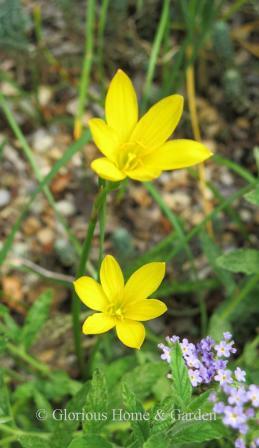 Zephyranthes grandiflora, large-flowered zephyr lily, Zones 9-10.  Z. grandiflora, as the name implies, has larger flowers (and leaves) than other species of zephyr lilies.  Deep pink buds rise singly and open to reveal pink flowers with white centers. Typically opening after a good rain, a clump may have several flushes of bloom over the season.  This species is less hardy than Z. candida,  or Z. citrina, so the bulbs must be dug and stored over winter in a cool location to be replanted in spring.   Or, they are great for growing in containers and can be brought indoors for the winter. 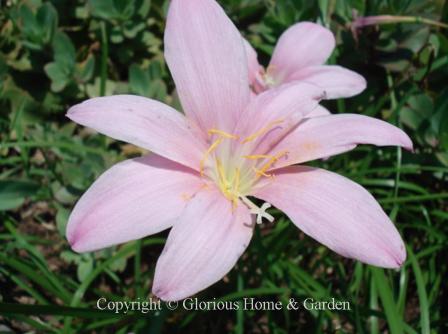 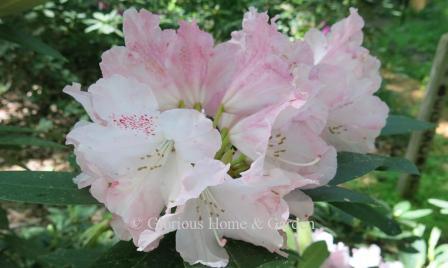